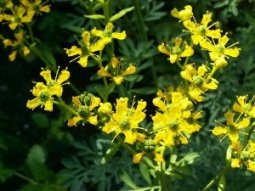 Rue is a hearty perennial and powerful herb with an interesting history. Wiccans use it for protection, cleansing and especially prosperity. Rue candles are often used in rituals to ask for financial or other assistance. One of the traditional prayers used in connection with this candle is quite beautiful:

My work is hard, but I’m strong and I do not complain
My rewards are few, but I treasure what I have
My needs are great, but my petitions are small
Asking only for what is just, I wait with quiet patience
Receiving in humble gratitude.

After this prayer is said, the petitioner states their specific need and then the candle is lit.

But Rue has other religious connections as well. It is also called “herb of grace,” or herbygrass and was used in the early Roman Catholic Church to sprinkle holy water on the people during worship. In the Middle East hyssop is traditionally used instead of Rue, but some believe Rue was used in Europe because it had antiseptic properties. This Roman Catholic custom may have been adapted from an ancient Roman ceremony where weapons, flags and the like were “purified” by waving a laurel branch over them.

The scientific name of this ancient herb is Ruta Graveolens. Ruta was the Latin name of the herb when the Romans introduced it to the English. It was eventually Anglicized to Rue. Graveolens is Latin for “a strong or offensive smell.” Personally, I think it smells just fine!

One of my mentors, Byron Ballard, calls rue “rocket fuel” and can be used to strengthen any magical intention. It is definitely one of my go-to herbs and I always keep a little rue oil handy for a variety of magical uses. Great stuff!

My name is David Taliesin. I'm an writer, teacher and retreat leader who explores the connections between Christian and Pagan Spirituality. E-mail me with any personal comments you'd like to share and I will do my best to answer them. You can also contact me through my Facebook page www.facebook.com/davidtaliesinauthor
View all posts by David Taliesin →
This entry was posted in Creation Spirituality, Herbology, Prayer and tagged Spirituality, Wicca. Bookmark the permalink.