The Wand of Moses? 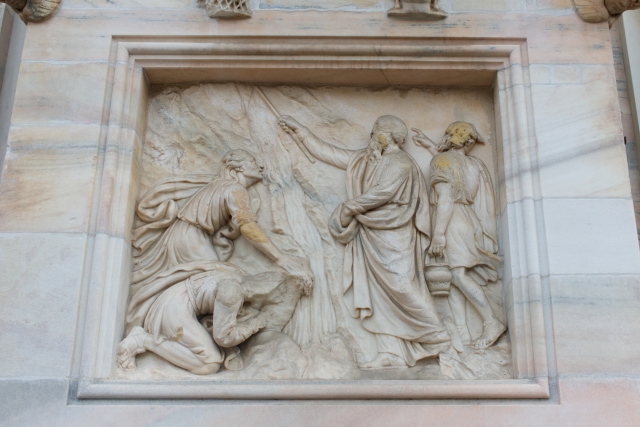 Moses getting water from a rock. Duomo Cathedral, Milan ©2019 by David Taliesin

While I was in Milan, a panel on the outside of the Duomo caught my eye. It looked as if the person in the picture was wielding a wand. I captured the image and did some research when I returned home. It is, indeed, the story of Moses striking a rock in the desert from which water miraculously began to flow. This is mentioned in the Torah in Exodus 1:1-7 and Numbers 20:9-11:

So Moses took the staff from before the LORD, as he had commanded him. Moses and Aaron gathered the assembly together before the rock, and he said to them, “Listen, you rebels, shall we bring water for you out of this rock?” Then Moses lifted up his hand and struck the rock twice with his staff; water came out abundantly, and the congregation and their livestock drank. [NRSV]

Now realize the English translation above says it was a “staff.” It’s the same staff that Moses used to perform other miracles while the Israelites were in Egypt. However, the Hebrew word used here can also be understood as a “rod” used for chastising, a “scepter” used by a king or queen, a “lance” that is thrown, or a walking “staff.” It would appear the length varies. Some are short, some are long.

The use of a shorter staff or wand by Moses is not only seen on the Duomo, it appears in other images of Moses as well such as the photo below from the Catacomb of St. Callixtus, Rome: 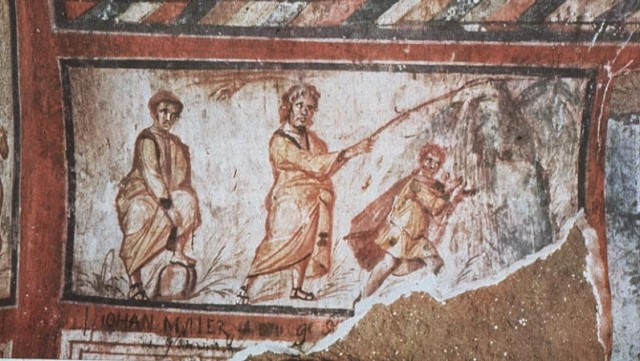 This looks more like an elongated wand due to the way he holds it. One would probably wield a staff differently.

Not surprisingly, the wand also appears in ancient Egyptian art as well. We see examples of this in the Tomb of Sennefer in Luxor: 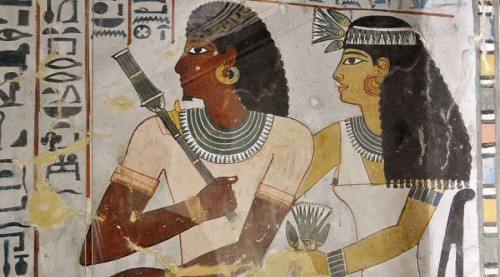 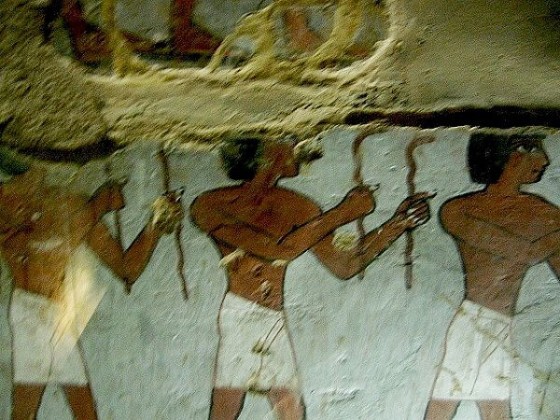 Acts 7:22 says that “Moses was instructed in all the wisdom of the Egyptians and was powerful in his words and deeds.” [NRSV] Perhaps we can infer from this that Moses was taught the spiritual/magical practices of the Egyptian priests. Therefore, a shorter staff is not out of the question.

Now, I know there are some of you out there who probably think I’m crazy for even proposing this idea. But Google “Christ the Magician” and you will see similar wands in the hands of both Jesus and Peter! Early Christians seemed to have no problem with this portrayal of their Biblical heroes. Then why should we?

In my own spiritual practice I don’t often use a wand. But when I do, I understand it to be a focusing device, an extension of my arm through which power flows. I do not believe it has any power on it’s own (forget all the Harry Potter BS you’ve seen in the movies). It is a conduit through which I can direct both Divine and Earth energy toward it’s intended purposes. I can do the same thing with my hands or a crystal but, sometimes, it just feels like the wand is the right tool to get the job done.

So, I have no problem with the notion of Moses using a shorter wand instead of a staff. Some early Christians had no problem with it either. The Torah tells us that Moses understood his staff/wand to be an instrument through which the power of YHWH could be directed. It had no super powers in and of itself, and that really resonates with my understand of this tool’s function.

If your beliefs are different from what I’ve posted, I totally respect that. If you need Moses to yield a staff like Charlton Heston, I’m good with that, too. I share this information as a way to connect some dots that I don’t see to many other people connecting. But that’s my job with Sabbats and Sabbaths, as I explore the connections between Pagan and Judeo-Christian spirituality.

My name is David Taliesin. I'm an writer, teacher and retreat leader who explores the connections between Christian and Pagan Spirituality. E-mail me with any personal comments you'd like to share and I will do my best to answer them. You can also contact me through my Facebook page www.facebook.com/davidtaliesinauthor
View all posts by David Taliesin →
This entry was posted in Magic and tagged desert, Egyptian, Moses, priest, rock, staff, Wand, water. Bookmark the permalink.